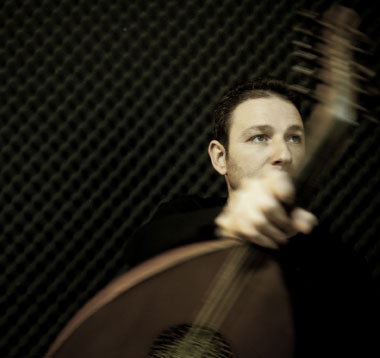 Nizar Rohana is a Palestinian ud player based in the Netherlands, distinguished for combining virtuosity within fresh contemporary compositions while maintaining the ud’s authentic language.

Rohana was born in the village of 'Isifya on Mount Carmel near Haifa city to a father who played ud in communal celebrations and a mother who accompanied him on percussions. From a young age, Rohana played music, picking up the ud when he was 13.

In 2001 he was awarded a Bachelor of Music and Arts (specialisms in ud performance and musicology) from the Arabic Music Department of the Jerusalem Academy for Music and Dance and the Musicology Department of the Hebrew University. For some time he then focused his work on the music of the great Egyptian composer Muhammad Al-Qasabji, completing his Master’s degree in 2006.

Since September 2013, Rohana has been based in the Netherlands pursuing his PhD in improvisation and composition in solo ud performance at Leiden University Academy for Creative and Performing Arts. He is working under the supervision of Prof. Joep Bor, Prof. Frans De Ruiter and Dr Anne Van Oostrum, as part of the doctoral programme designed for musician-researchers, docARTES.

As a performer, Rohana’s wide stage experience as a soloist and within groups encompasses playing traditional, modern, experimental and world music. During the last fifteen years, he performed in countries such as Japan, Morocco, Egypt, Turkey and in the USA and Europe, releasing his first album Sard (Narration) in May 2008.

In 2013 he formed his own trio together with the Hungarian double bass player Matyas Szandai, and French-Lebanese percussionist Wassim Halal, releasing their debut album Furat (Euphrates) in 2016.

In 2015, Rohana was invited by the renowned Dutch bass player Tony Overwater to participate in the music recordings for the recent IKON documentary series 'Om de Oude Wereldzee' (‘Around the Ancient World Sea’), based on the travels of Dutch politician Abraham Kuyper. In 2016, Overwater and Rohana formed Madar Ensemble together with the Dutch clarinettist Maarten Ornestein; Tunisian violinist and viola d’amore player Jasser Haj Youssef and Jordanian percussionist Nasser Salameh. Their debut album was released in May 2019.

Between 2001 and 2007 Rohana was one of the main ud and music theory teachers at the Edward Said National Conservatory in Jerusalem, Ramallah and Bethlehem, and in 2006 he also worked as the deputy for academic affairs.